The Multi-Tasking IT Band - Balanced Movement Studio
Share this with your friends! 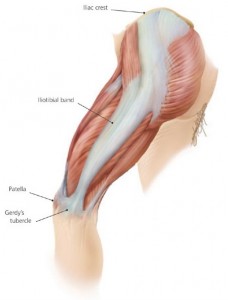 In our busy culture focused on productivity, multi-tasking has become a common theme as a method to accomplish more in a given amount of time. However, productivity and performance studies indicate that multi-tasking is detrimental to performance quality to such an extent that productivity is actually better if you simply focus on the current task, complete it competently and then move to the next task.

During activity performance, multi-tasking with the Iillio-tibial Band (ITB) in the hip and leg can lead to a variety of problems and performance deficits. The most common complaint with the IT band is excessive tightness. There is a variety of IT stretches that many of us do regularly; yet still complain about tight IT bands. This excessive tension often can’t be helped, since functionally we are asking the ITB to multi-task during running or cycling activity. This functional multi-tasking is inefficient and stressful to the physical structures.

The IT Band is a thick fibrous tract of tissue that originates from Tensor Fascia Latae (TFL) muscle on the most superior and lateral aspect of the hip. The IT band covers the outer portion of the thigh from the above the hip to below the knee. The role of the TFL and ITB is to provide a broad stable attachment site for the Gluteus Maximus muscle. The glut. max. is the primary power muscle for extending the hip, i.e. driving the leg backwards to propel the body forward in space. The TFL & ITB are also positioned so they can provide lateral support to hold the pelvis erect during single leg stance. However, this should not be the primary role of the ITB & TFL. The deep, central buttocks muscles, the Gluteus Medius & Minimus are responsible for holding the pelvis upright so that the pelvis doesn’t drop to one side or shift out to the side excessively when you are extending the hip with the Glut Max. If the gluts are not working properly, then the ITB must multi-task, becomes excessively strained and becomes problematic.

A simple exercise to help overcome these problems is shown. In keeping with the theme of this article, the intention for this exercise is to focus on the posterior hip musculature.

Start position: Stand on one leg and lift the opposite knee allowing the arms to swing as if running.
Finish position: Squat down on the stance leg by sitting back with the pelvis. Extend the hip to straighten the leg that was in the air behind you while reversing the positions of the arms.
Maintain an erect torso as you do the squat. If you desire more load, do the exercise holding dumbbells.

The work should be felt primarily in the glutes in the back of the hip. If you feel strain in outside of hip and down side of thigh, then you are using ITB/TFL too much for stability. To correct this, shift the pelvis left or right while focusing on maintaining the top of the pelvis level until you feel the deeper gluts in the back of the hip. If the work is mainly in front of thigh/quadriceps instead of the gluts, then the knee joint is contributing too much. To correct, bring knee further back relative to the foot and drop the pelvis further backward as you squat till you feel the work in the center of the buttocks.

With professional guidance from Elizabeth and Brian I have transformed my running form. The whole body approach to healthy form gave me strength to better my running performance. After 3 years I am still challenged with new dynamic exercise routines. With an entire package of wellness experts dealing in Yoga, Chiropractic, Message and more you can always be sure and find assistance for your health concerns.